Scandic Aviation and Sjöö Sandström have been supporting and promoting general aviation within the Nordic countries for some time, and this time they are encouraging the competitors at the Swedish Aerobatics Championships by presenting the Sjöö Sandström timepiece, the UTC Skydiver, as the prize for the winner of the ‘Sportsman’ division. 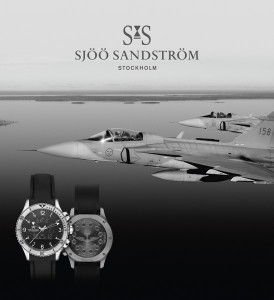 Andrew Gratton, Scandic Aviation’s CEO and the official Aviation Brand Ambassador for Sjöö Sandström will also be taking part in the  Swedish Aerobatic Championships, for the second year now.

“It is absolutely fantastic to have the support of Sjöö Sandström going into an event like this”, said Gratton. “Scandic Aviation and Sjöö Sandström have been working on several projects in the last two years in the aviation industry which actively promote growth and sustainability. Ultimately, we want to encourage the youth to take part in aviation related activities and to show that piloting aircraft is not reserved for the select few.”

The ‘Svenska Konstflygförbundet’ have been working hard over the last few years to increase the interest in Aerobatics and provide a platform for competitors to compete, but as a non profit organisation they rely on working closely with the various municipality’s and Airport Managements, as in this instance with Gävle Airport, the Gävle Flying Club and the Gävleborg ‘flygförbund’. Hence the partnership with Scandic Aviation & Sjöö Sandström was highly welcomed as this is the first year a prize is now up for grabs.

“We are very excited to see our sport evolving. The Aerobatics community is very much one that welcomes newcomers and a great platform for personal development and engaging with people from all walks of life. It really is for everyone. I am very much looking forward to seeing all the new contestants and taking part this year!” said Gratton.

This year will see young Sofia Linberg of Stockholm competing, who recently took home Silver at the Nordic Masters in Aerobatics. She will be met with stiff competition from a large group of contestants at the Swedish Aerobatic Championships.
Aerobatics is a highly disciplined sport which requires immense concentration and to be physically fit too. Some like to call it the ballet of the sky. The aircraft pilots endure high g-force while still steering the aircraft through the sky with extreme accuracy while adhering to set out manoeuvres. A panel of judges will judge each manoeuvre in sequence leaving the contestants with a final percentage, and the contestant with the highest percentage wins.

It is a superb spectator sport and all are welcome to the Gävle Airport on the 25-27th September for the Swedish Aerobatics Championships 2015.

See below for details: